And Then There Were None (1945), directed by René Clair 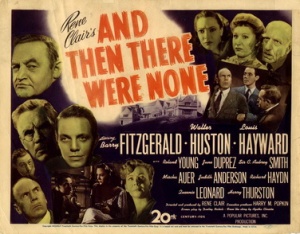 The first filmed adaptation of Agatha Christie’s novel, though featuring a variation of the ending that Christie herself altered for a stage production two years earlier. Otherwise, the premise and the bulk of the story remain the same, as ten people trapped on an island are accused of various crimes and then picked off one by one by an unidentified member of their own party. If Christie neglected to include much humor in the novel, Clair rectifies that shortcoming and then some, playing out the mystery in almost farcical terms. It works, thanks less to the script than the cast, which includes Walter Huston as the alcoholic Dr. Armstrong and Richard Haydn as the unfairly mistrusted manservant Rogers. Nothing terribly remarkable, but a genial film nonetheless.